In computing, Hyper Text Markup Language (HTML) is a markup language designed for the creation of web pages and other information viewable in a browser. The focus of HTML is on the presentation of information — paragraphs, fonts, italics, tables, and so forth — rather than the semantics — what the words mean.

Originally defined as a highly simplified subset of SGML, which is used by organizations with highly complex publishing requirements, HTML is now an international standard (ISO/IEC 15445:2000). The HTML specification is maintained mainly by the World Wide Web Consortium (W3C).

The initial versions of HTML were very tolerant of simple kinds of coding mistakes. The browser commonly made assumptions about intent, and proceeded with the rendering. Over time, the trend has been to create an increasingly strict language syntax. HTML 5.01 is the current version, although the W3C is moving toward replacing it with XHTML, which applies the relentlessly strict checking of XML to the HTML world.

HTML is a form of markup that is oriented toward the presentation of single-page text documents with specialized rendering software called an HTML user agent, the most common example of which is a web browser. HTML provides a means by which the document’s main content can be annotated with various kinds of metadata and rendering hints. The rendering cues may range from minor text decorations, such as specifying that a certain word be underlined or that an image be inserted, to sophisticated scripts, imagemaps, and form definitions that control web browsers. The metadata may include information about the document’s title and author, structural information such as an expression of how the content is segmented into paragraphs, lists, headings, arbitrary divisions, etc., and most importantly, information that allows the document to be linked to other documents.

Although most HTML documents contain a main body of text, it is not uncommon to encounter minimal HTML documents that exist only to present visual media in a web browser.

HTML is usually authored in a text editor and stored in a text file with a name usually ending in “.html” or “.htm“. Such a file is typically created with the intent that it will be accessed over the World Wide Web, which uses the HTTP network protocol to transfer the files to requesting computers. A request for an HTML document is usually made by a web browser, such as Apple Safari, Mozilla Firefox, or Microsoft Internet Explorer, and upon receipt, the document is rendered and presented to the user. However, HTML can also be transmitted in email messages and rendered by software for email reading, or processed by cellphones that have web browsing capabilities. 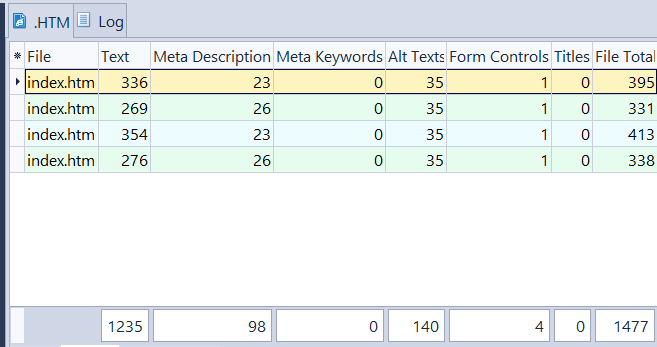 AnyCount is able to optionally include important additional count statistics for .HTML files:

When counting of .HTML files is completed, you can: