To process Word Count in XML, let’s first learn a little more about this format. The Extensible Markup Language (XML) is a W3C-recommended general-purpose markup language for creating special-purpose markup languages, capable of describing many different kinds of data. It is a simplified subset of SGML. Its primary purpose is to facilitate the sharing of data across different systems, particularly systems connected via the Internet. Languages based on XML (for example, Geography Markup Language (GML), RDF/XML, RSS, MathML, Physical Markup Language (PML), XHTML, SVG, MusicXML and cXML) are defined in a formal way, allowing programs to modify and validate documents in these languages without prior knowledge of their form.

XML provides a text-based means to describe and apply a tree-based structure to information. At its base level, all information manifests as text, interspersed with markup that indicates the information’s separation into a hierarchy of character data, container-like elements, and attributes of those elements. In this respect, it is similar to the LISP programming language’s S-expressions, which describe tree structures wherein each node may have its own property list.

XML makes no prohibitions on how it is used. Although XML is fundamentally text-based, software quickly emerged to abstract it into other, richer formats, largely through the use of datatype-oriented schemas and object-oriented programming paradigms (in which the document is manipulated as an object). Such software might only treat XML as serialized text when it needs to transmit data over a network, and some software doesn’t even do that much. Such uses have led to “binary XML”, the relaxed restrictions of XML 1.1, and other proposals that run counter to XML’s original spirit and thus garner an amount of criticism. 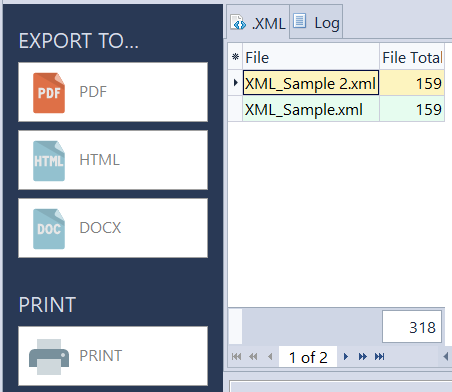 When AnyCount completes the word count or other units count of .XML you have a wide variety of possibilities for viewing and saving the count result: